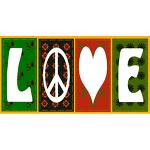 Actual J4 writes...
You can change the world.

It's simple and anyone can do it.
Love = Peace

It's a simple formula and is not reversible. Peace does not necessarily equal Love but Love will equal and achieve Peace. One thing leads to the other through the cause and effect principle.

There needs to be a shift in the worlds consciousness to Love. This could take place with Gods help all at once one day but more likely and realistically will take place over a period of time. The way to achieve this shift is to teach our children from a very young age not only religion but the basis for that religion. Love and to Love ones fellow man as one would want to be loved. These children will continue to teach their children and so on through generations and the Love will change the world to a peaceful one. Sounds too simple but it will work over time.

There may be many religions but all don't seem to realize that they are worshiping one God. If God is infinite then there can be only one infinite. As any philosopher, mathematician and even many theologians would tell you, you can't have anymore than one infinite, it is a logical impossibility. If God is omnipresent, omnipotent, and omniscient how could there be more than one God competing in all these areas. Only one God could achieve this. Two or more would not work. One God and one principle from that God for all in all religions. Love and Love of your fellow man as you would want to be loved.

Unfortunately war must sometimes be waged to achieve and bring about Peace. Had we not all waged war against Hitler and won we would be living in a much less peaceful world today. War was necessary to achieve Peace. In today's world we face a threat to Peace from religious radicals who have warped their religious views into violence and hatred and forgotten the Love that founded and is the basis for all religions threatening the Peace and security of the world. Unfortunately war it seems must once again be waged to achieve Peace. Lack of Love is the enemy of Peace.

Love is like a rose without thorns. Through Love we can remove some or all of the thorns and achieve Peace.

You may say It sounds like it's all too simple and the truth is that It is. It's just that simple. Teach and practice Love and Love of your neighbor and eventually over time the world will have Peace on Earth.
You can change the world.

The Right to be a leader.

Excerpt from "The Right to Lead", by John Maxwell
A good student of leadership can learn lessons almost anywhere. Recently I received this letter from a friend who discovered what it takes to lead up near the top of the world:
Dear John,
In August 1999, my wife, Minnietta, and I vacationed with some friends who live in a remote part of Alaska near Denali Park. One day they took us to visit their neighbor, Jeff King, who lives a few miles away. Jeff is a sled-dog racer who has won the 1,000-mile Iditarod race from Anchorage to Nome, Alaska, three times (1993, 1996 and 1998). It was a joy to experience Jeff's love and passion for his seventy huskies and his admiration for their maturity, strength, and courage.
Jeff told us that when he starts the Iditarod race, he starts with sixteen dogs and rotates the lead dog frequently to give all the dogs a chance to lead since every one of them wants to be the lead dog. Eventually, he finds the dog that is the real leader because it is a dog that is energetic and persistent in leading, and that dog becomes the leader of the pack. It is chosen as the leader because it leads; it is able to motivate the other dogs to follow by its own energy and enthusiasm.
Jeff told us that in 1996, the lead dog was a two-and-a-half-year old female named Jenna. That was very unusual since there were only two females in the pack. She was so young, and she was smaller than all the male dogs. But Jeff said with emotion, "She was our leader; when a blizzard came, she didn't give up. She kept barking and running even when the snow was over her head and inspired us all to keep going. Even at her young age, she has the mental maturity of a leader." When Jeff was congratulated for winning the 1998 Iditarod, he lifted up his lead dog and said, "Here is the leader who won the race for us."
John, I found this story very inspiring and hope you might be able to use it. Grace and peace.
Sincerely,
Kent Millard
*****************************************
Want to go to the next leadership performance level. John C. Maxwell, an internationally recognized leadership expert, can help you. Read some of his books.
Click here: Amazon.com: John c. Maxwell: Books
*****************************************
Check out http://www.wilsonmotivational.com/
Let me help you get to the next level.
Let's meet. I'll buy you a cup of coffee and talk about how we can work together in a coaching relationship.
Posted by The Real Jim Wilson at 10:07 AM No comments:

Should You Spend Time This Year On A Plan?

That seems like a silly question perhaps, but so many business people don’t bother really planning their year (much less their entire business) that I have to ask.

Here a few of my best reasons to make time in the next two weeks to get a plan done.

Focus Changes Everything
Having a plan forces you to decide where to focus your time, energy and money in the coming year. Focus is the force that drives all things to greater power and success. An unfocused stream of light creates a gentle illumination while a focused stream creates a laser beam capable of cutting through any obstacle. An unfocused team of rowers wanders around the water, while a focused team can conquer any ocean.

Writing Goals Down Changes Your Brain
For years, scientists have known that the act of writing things down changes the way they are stored in your brain. That’s why you had to spend so much time in school writing out your multiplication tables, etc. Writing your plan plants seeds in your subconscious that can dramatically increase your likelihood of achieving. Even if you fall short of your ultimate goals, you’ll likely far exceed what you would have accomplished had you not bothered to plan.

Planning Doesn’t Have To Be Hard
When I ask people why they don’t have a plan, many tell me they don’t have time to write a huge plan and, even if they did, they probably wouldn’t use it anyway. It is just to easy to go back to winging it as real life deviates from what you planned. Proper planning doesn’t have to take tons of time or result in the death of a hundred trees. You can create a complete annual plan in just 20 minutes and use only one sheet of paper. Best of all, the plan you create will be flexible enough to accommodate changes in the economy and your business as the year progresses. A plan shouldn’t be a prison but rather guardrails on the highway to your goals.

Laura http://www.dancingelephants.net/
Posted by The Real Jim Wilson at 9:32 AM No comments: