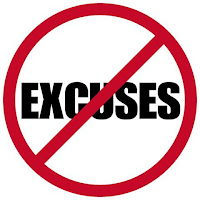 Don't make excuses. Make things happen. Make changes. Then make history.
Doug Hall
The only man who is really free is the one who can turn down an invitation to dinner without giving an excuse.
Jules Renard
Don't make excuses - make good.
Elbert Hubbard
He who excuses himself accuses himself.
Gabriel Meurier
Maybe you don't like your job, maybe you didn't get enough sleep, well nobody likes their job, nobody got enough sleep. Maybe you just had the worst day of your life, but you know, there's no escape, there's no excuse, so just suck it up and be nice.
Ani Difranco
How strange to use "You only live once" as an excuse to throw it away.
Bill Copeland
No one ever excused his way to success.
Dave Del Dotto


ROE= Return On Energy
Posted by The Real Jim Wilson at 12:12 PM No comments: